Do Genetics Make For Better Strength And Power Athletes? 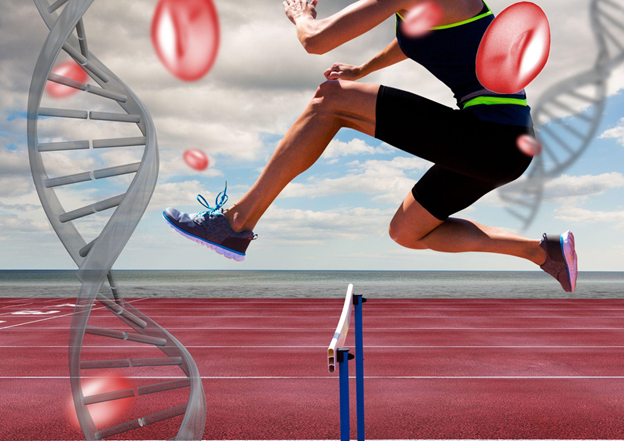 19 Nov Do Genetics Make For Better Strength And Power Athletes?

Did you ever wonder how the world’s best athletes became so good? What makes Usain Bolt dart across the track at light speed? Is Michael Phelps half dolphin?

Genes and the environment play a role in influencing athletic performance. A person’s athletic ability is influenced by a variety of physical traits, primarily the strength of the muscles that allow them to move (skeletal muscles) and the type of fibres that they contain. Skeletal muscles consist of fast-twitch and slow-twitch muscle fibres. Slow-twitch muscle fibres contract slowly, but they can work for long periods without getting tired; this enables endurance activities such as long-distance running. Sprinting and other activities requiring strength and power are good for fast-twitch muscle fibres, which contract rapidly and tire quickly. Additionally, athleticism is related to the body’s ability to deliver oxygen to its tissues (aerobic capacity), muscle mass, height, flexibility, coordination, and intellectual ability.

Studies focused on similarities and differences in athletic performance within families, including between twins, suggest that genetic factors underlie 30 to 80 per cent of the differences among individuals in traits related to athletic performance. Many studies have investigated variations in specific genes thought to be involved in these traits, comparing athletes with nonathletes.

The genes ACTN3 and ACE have been studied most extensively as factors associated with athletic performance. Strength and endurance are influenced by these genes, which determine the type of fibres in muscles. As a result of the ACTN3 gene, a protein called alpha (*)-actinin-3 is produced, which is found primarily in fast-twitch muscle fibres. This gene variant, called R577X, generates an abnormally short form of *-actinin-3 that is quickly degraded. The genetic pattern (genotype) 577XX describes people with this variant in both copies of the gene. A complete lack of *-actinin-3 in these individuals appears to reduce the proportion of fast-twitch muscle fibres and increase the proportion of slow-twitch fibres in the body. In some studies, the 577XX genotype is more prevalent in high-performing endurance athletes (for instance, cyclists and long-distance runners) than in the general population, while in other studies these findings have not been found.

Among athletes who rely on speed or strength, such as short-distance runners, the 577RR genotype tends to have a high proportion of fast-twitch fibres.

It gets a bit more complicated but sticks with us.

A gene called ACE directs the production of a protein called an angiotensin-converting enzyme, which converts angiotensin I into angiotensin II. Although its role in controlling blood pressure is not well understood, angiotensin II may also influence skeletal muscle function. ACE I/D polymorphisms alter gene activity by altering the structure of the ACE gene. A single copy of each version, called the ID pattern, is the result of having two copies of the D allele (DD pattern) or two copies of the I allele (II pattern). Angiotensin-converting enzyme levels are highest in DD of the three patterns. Fast-twitch muscle fibres and increased speed are believed to correlate with the DD pattern.

There are many other genes associated with athletic performance with diverse functions. The function of some plays a role in skeletal muscle activity, while others play an important role in cellular processes such as energy production, nerve communication, and other cellular processes.

Researchers have examined variations across the entire genomes of elite athletes to determine if certain sections of the genome are associated with athletic ability (called genome-wide association studies or GWAS). In these studies, more than 150 different variations associated with athletic performance have been identified; however, the majority have only been observed in a few studies and the significance of most of these changes has yet to be determined. Several genes are likely to play a role, but each contributes only a small amount to athletic performance.

So what is it?

If a child and his or her parent excel at a sport, do those similarities stem from genetic factors passed down from parent to child, from similar environmental factors, or (most likely) from a combination of both?

So genetics and the environment both play a part in determining athletic ability.

But this comes with an important reminder – it doesn’t mean that you weren’t born with the genetic ability, you are a lesser athlete or your potential is stifled. Some exceptional athletes were not “born with it”. With training and discipline, anyone can become an athlete. Alternatively, having athletic-inclined genes does not mean you will become a dominant athlete. Usain Bolt and Micheal Phelps train like crazy to get to where they are – it’s not just handed to them.

Become a stronger athlete with VH&F

Our vision at VH&F is to help you pursue and reach your goals by changing industry standards. Regardless of their fitness level, we want all of our members to find health & fitness engaging and motivating.